The War on Talent

– 5 minute read – The so-called “war on talent” that you’ve been hearing your HR and recruitment teams carry on about is absolute BS! An open letter to CEO’s (but recruiters can take a read too)

The so-called “war on talent” that you’ve been hearing your HR and recruitment teams carry on about is absolute BS!

What we need to do, is declare war on the outdated methods, approaches and thinking that are used when it comes to sourcing, securing and retaining talent. But, for now, let’s just pick one battle – sourcing talent.

One of the first things I was taught by my first boss and mentor about people in organisations is that we generally hire people for their skills (or what they say they can do in their CV), but we end up parting ways (firing them) because of their attitude, behaviour and approach. Wise words, and a philosophy I have long applied in business. I would argue that in many cases, skill can be taught and acquired, but attitude, not so much – it’s inherent!

There is no doubt that there have been shifts in the recruitment industry, with the job boards of old, struggling to remain relevant against LinkedIn Jobs (just to mention one) with more innovation and disruption in this space to come. But, that’s not actually the problem. All that these platforms offer are tickets to the game; they open lines and channels of communication and they get a conversation started with potential talent. The real conundrum is what lies beneath – how an organisation actually does things; the culture and collective mindsets; the policies and procedures they desperately cling to in the hope that they will provide some semblance of stability.

Every CEO running a business knows (or at the very least has heard or read) that innovation, disruption, and transformation need to be key parts of their strategy. And in theory they fully agree and support this. They even throw it about in meetings and strat sessions, yet not much actually changes. Why?

You see, we are in love with the idea, but not what it takes to get there. We love the idea of finding and employing the very best talent out there; of creating a culture where that talent can thrive; having a strategy that means talent can and will deliver on the expectations of the shareholders; having a leadership team that empowers said talent and ultimately creates more opportunities for them. What’s not to love about those ideas? 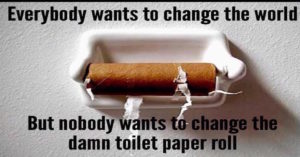 However, are we as in love with what it will take to get there, and more specifically the change it will require to get there? And there’s that dreaded word – “change”.

Just in case you’re wondering WTF I am on about, let me share a recent interaction with you. For the sake of all egos concerned, names have been changed to protect the guilty.

A company, let’s call it ABC Inc. is looking to recruit a C-suite Exec.

The post starts off with “ABC Inc. is disrupting the _____ industry (you fill in the blank – any industry will do).

[NOTE: To those paying attention, here’s your first clue: we are in love with the idea of disrupting our industry, but as it turns out, not so much the idea of wholescale disruption, just enough for a catchy marketing angle and pretty much leave everything else as it was].

Early on in the conversation, an email stated “We are not in a major hurry to fill this role as we are searching for the right candidate”. You will gather from the below that there were a few emails backwards and forwards, and on receipt of a confirmation that the candidate did not possess a tertiary qualification, this humdinger arrived in the inbox: “Unfortunately we are unable to bypass our requirements for this role. It is a very senior role and a qualification with excellent transcripts is one of the requirements. Wishing you all my best in your career search”. [Corporate speak for “tell your story walking”]

You see, whilst you state “it’s one of our requirements”, in reality, it is the first requirement – nothing else matters, nor will correspondence be entered into if that box is not ticked.

Now, I am quite sure the educational requirements are there for a very good reason and are perfectly understandable. After all, as a Senior Recruiter for ABC Inc, responsible for sourcing and employing the very best talent out there for the ultimate benefit of the organisation (admittedly “best” having a very wide and subjective definition), it is absolutely critical that your first point of departure be a formal qualification. That, and excellent transcripts obtained from a tertiary institution whilst studying something 15 to 20 years ago that you have never actually or only marginally applied, or that bears absolutely no resemblance to what you are actually doing now and will be required to do in the new role.

ABC Inc. wrote a really great brief, went so far as to talk about values and what a good fit might look like, and were quick to respond and be in good communication, but they just couldn’t help themselves. They have just “lost” the war for talent. Why? Because, as it turns out, their only definition of disruption (in recruitment anyway) is to bypass agencies and request direct submissions. Or perhaps it’s more a case of not believing that they get value from the agency model, or they have a recruitment team in place already, or maybe it’s just cleverly disguised cost cutting? And, if that is the thinking in the talent department, then I would argue that the same would most likely be true across the business.

Would they be a good culture fit in the C Suite and in the organisation?

Does this individuals’ values, perspectives and approach to life mirror those of the organisation?

Would other people “do well” being around them, or would they likely drag the whole team down?

Would they be able to bring out the best of everybody around them?

Do I trust them?

Would I be prepared to give this individual the opportunity, freedom and flexibility to do what I expect of them, thereby demonstrating that they are in fact, worthy of my trust.

Would the team be able to depend and count on them?

Do I think they can do the job?

What have they actually produced, made, built in the past – are there actual tangible “production” reports?

Do they have the intellect to grasp the technical aspects required? I am working on the premise that as the exec in the role you, or the talent team, have gone to market and employed the very best (see definition above) and the most highly qualified experts in their respective fields – who hopefully know way more than you do.

Once they are hired,  you would expect them to create an environment conducive to allowing their team to be their best, to empower them, to guide them, to coach them and to support them – all this as opposed to micro managing them because they think they know better or because they carry the label of “boss” (or because they have a degree, or better yet, an MBA).

Don’t get me wrong, I do not discount the value of qualifications and education (and transcripts), but I would argue that it is the application of what you know and your ability to actually deliver results that is far more important and valuable to the shareholders.

So, what about “being in love with the idea, but not what it takes to get there”?

What are the great ideas that you have that could make a difference to your business, your team, your role?

What fixed ideas are you holding onto that would make implementing them hard?

What are the considerations you have around those ideas and are they real or are they your own? Are you prepared to challenge them?

What thinking, mindsets, beliefs or ideas would need to change in order to simply START to make some of them a reality?

I think that old Apple ad that said “those who are crazy enough to think they can change the world, are the ones who do” needs a bit of a revamp…

“Those who are bold enough to do what it takes to change the world, are the ones who do”